At the end of last year, we discussed the Pay Period Leap Year and what it means for employers. If your first weekly paychecks will issue on Thursday, January 1, 2015, you will have a fifty-third pay period on December 31, 2015. If your first bi-weekly paychecks will issue on Thursday, January 1, 2015, you will have a twenty-seventh pay period on December 31, 2015, depending on payday holiday processing rules. This means that for employers who pay employees weekly or bi-weekly, 2015 could be a Pay Period Leap Year, but it doesn’t mean that all of your employees will have one. We discussed three options for handling Pay Period Leap Years if you pay employees on a weekly or bi-weekly basis, each of which we discussed in detail in our December post:

Many employers have chosen Option 2, which is a sensible middle ground. As we warned in the original post, this covers only the most common situation. You must ensure that each of your employees actually have 27 pay periods before proceeding with Option 2!  If you chose Option 1, you get a break here because your employees’ paychecks never change.

Under Option 2 (or 3, for that matter), while the majority of your employees will leap in a Pay Period Leap Year, not all of your employees will. Let’s take the example of employee “John Newbie.”  John started at your company on January 1, 2015, and your offer letter gives him a $100,000 annual salary paid in bi-weekly increments, paid in arrears per your usual practice. When he started on January 1, 2015, you also informed him that because of the Pay Period Leap Year, his $100,000 annual salary would be divided into 27 bi-weekly payments this year, rather than 26. Maybe you even gave him a copy of my Pay Period Leap Year post. No problem, right? Wrong!  You might have inadvertently created a wage and hour problem. If you’re thinking, “But Doug, John is working the entire year, and we’re in a Pay Period Leap Year!” then let’s look at this on a simple spreadsheet: 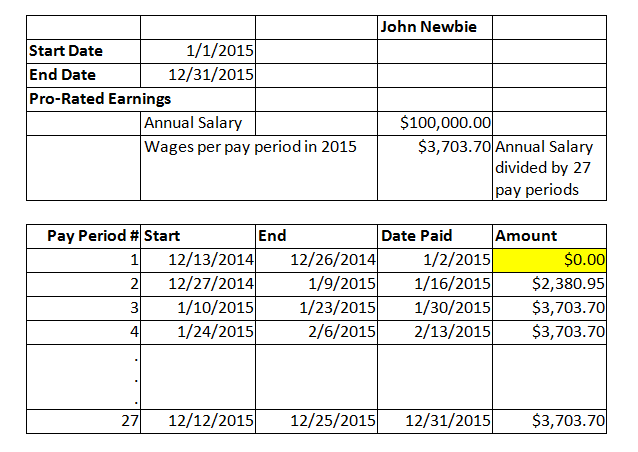 If you ever took an accounting or bookkeeping class, you might be tempted to conclude that this is just a cash versus accrual problem that only shows up on a W-2, and that John will make up the $5,000 difference with his paychecks in January 2016. Except that he doesn’t. To simplify things, let’s assume that John works exactly one year, leaving after December 31, 2015. His first paycheck in 2016 looks like this:

That $1,322.75 paycheck does not make up for the shortfall. John is still $3,703.71 short for his 2015 compensation, even if you look at it on an accrual basis. In fact, he’s short exactly one paycheck because you made John “leap” by dividing his salary in 27 paychecks when, owing to his start date, he would only receive 26 of them in 2015.